Starting 1st december, a brand new paper guidebook will be available : "Rock around the World" !

Thierry Souchard make this nice book for us. Thierry is, among others, co-author of the 2 famous guidebook "Falaises de Corse" and "Grandes voies de Corse".

This time, he left the "island of beauty" to make a nice world tour of climbing destinations and offer us a compilation guide that you can pre-order today on its website (at a preferential rate)!

Thierry kindly answers our questions about this book.

Hello Thierry. We know you well as author of the Corsica's guidebooks but we don't know more about you. Can you introduce yourself in a few words?

I started climbing at the age of 15, but it became a passion only five years later. When I arrived in Corsica 20 years ago, I wanted to go beyond the stage of 'consumer' and invest myself in the development of the activity by re-equipping many sectors and multi-pitches routes around Ajaccio, Gozzi for those who know. I also participated in some openings and especially the creation with friends of a climbing gym associative in Ajaccio to overcome the lack of infrastructure.

Then with Bertrand Maurin, we began the realization of Falaises de Corse guidebook by associating the regional committee Corse FFME to generate revenues for the maintenance of the climbing areas. Finally, I also got the BE climbing.

Corsica was not a playground big enough for you so you need to travel all around the globe?

Since my arrival in Corsica, my personal practice is focused mainly on discovery and multipitches routes, preferably on stoppers/nuts. This has led me to make a guidebook of multi-pitches routes in Corsica. It was with the same motivation that I have climbed around the world in multi-pitches mainly, inspired and guided by the beautiful books of Arnaud Petit, the famous "Walls of legend" which have been my books for a long time.

Corsica is a paradise of climbing still undervalued but it is obviously not the only one. By going elsewhere, I discovered new cultures and often new styles of climbing. The world of climbing is small and rather intimate especially among practitioners of multipitches routes. The contacts with the local climbers are done naturally and one can appreciate each country a little more of the interior; it is an opportunity to combine climbing with meeting and exchange. I stayed in touch with climbers from many countries.

And then there are the landscapes of course that are often striking; I think for example of the sandstone walls of Wadi Rum or the pudding towers of Meteora, truly unique places. But we could mention others like the imposing wall of El Capitan Yosemite that I have already had the opportunity to climb twice or the hand of Fatma in Mali (a place to avoid now ...). Climbing is a pretext for discovery and travel ... unless it's the opposite.

The multipitches routes around the world: how can you embrace such a project?

It was almost a logical follow-up after the release of the Corsica guidebooks in 2012 and all the trips I had already done. I started with the same desire to make a 'utility' guidebook, meaning precise in the informations and sufficient for a first trip to each destination, but also with beautiful full-page climbing pictures to dream before leaving . From then on, I took great care to return to the chosen destinations and sometimes even to redo routes that had already been climbed when I thought it necessary.

How long did it take you and how many areas are described?

I started in 2013 but a motorcycle accident in early 2015 slowed me down slightly. I have worked hard since the beginning of the year to finish it and update the information on the first sites visited. There are 7 areas described, some will find that it is little but each time, there are enough ways to fill a first stay:

How did you choose the selected destinations?

The 'climbing' interest was the main criterion for the choice of sites. But accessibility from Europe, a fairly stable weather over favorable times and the absence of unacceptable political tensions were also indispensable conditions.

The mandatory level required for the routes shown ranges from 6a to 6c for bolted routes and from 5c to 6b for trad routes.

There is a digital version of the Meteors already available on the ClimbingAway app. Have you planned to put more online?

Yes, I planned to put all destinations online by the end of the year.

Can you tell us more about the book? It is in several languages? How many pages, format, price and how to get it?

I chose a title in English, Rock around the World, because I hope to broadcast at least as much abroad as in France. It is fully bilingual French / English and will be distributed throughout Europe from early December.

For those who are in a hurry to have it (or offer it at Christmas), I have set up a pre-sale form with a preferential rate. 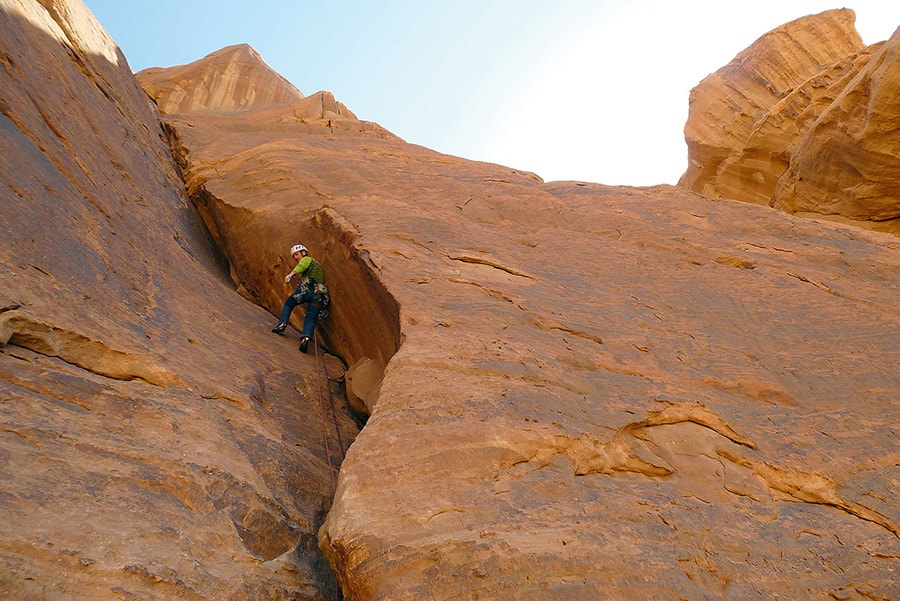 This topo is a topo of multi-pitches routes. Do you have any advice for gym climbers or single pitch climbers who would like to try multi?

Whatever the practice, climbing is an activity that can be potentially dangerous if you do not do it properly. It seems to me essential to start with people who will be able to explain the right actions, whether in an club or by calling in a professional directly; it also involves observation and curiosity, for example by going through his first multi pitches route top rope (with a reliable leader of course).

And of course, do not skip the steps, especially to go to the adventure field where you really have to stay modest during his first experiences: the pleasure is not necessarily here in the difficulty and pure sports performance but in the discovery and the much stronger adventure that emerges.

And you? What is your preferred climbing area?

Corsica obviously! It is a huge playground whose potential seems inexhaustible but I risk being taxed chauvinism.

Abroad, Meteora and Wadi Rum are the two destinations that have marked me the most; I think that any climber of big ways must have visited these 2 sites at least once in his life!

Strangely these are not the destinations where climbing is the most beautiful intrinsically (be careful, it's still great climbing) but there is a supplement ... Come on, let's say, spiritual almost palpable.

Finally, can you tell us about the news of the guidebook "Falaises de Corse"?

I just put the final point to 'Rock around the world' and I'm currently working on the new edition of "Falaises de Corse". It should be released in March / April 2018. There will be something new, especially in the South of Corsica with superb cliffs turned to the high level (until 9a and up!) And the confirmation of a trend, certainly still a little marginal: the single pitches in trad 'especially on Bavella: absolutely major!

The partnership with ClimbingAway will continue in 2018: having already published 3 regions of Corsica in digital format, we should continue broadcasting by next spring with all the cliffs of Corsica updates available on the app.