The Dolomites are one of the most beautiful mountain ranges in the world. There are lot of long routes at all levels of difficulty, but also there are countless crags, and sport climbers will find in these mountains a fantastic place to play. On this page, I want to tell you about the crags of Cortina d'Ampezzo.

The multitude of sport climbing crags around Cortina give climbing lovers about 2000 pitches that can be climbed, a really significant number and one which is growing as a result of constant efforts and undoubted passion which has always been an aspect of those attempting to provide climbers with a new and ever changing playground.

But it is definitely not only the amount of pitches which pulls climbers from all over the world: sport climbing in Cortina means finding yourself in one of the most beautiful places in the world, placed in a natural environment perfect for treating visitors to indescribable views and unforgettable thrills.

Ernest Hemingway, who had seen a large number of places, wrote thus in a letter to E.Walsh: “Cortina d’Ampezzo is the swellest country on earth. The people are good and square too. We spent the end of a winter there once, at the Hotel Bellevue. Luigi Menardi proprietor. It is the loveliest country I’ve ever known”. (See here)

Yes, a lovely place where forests and meadows have been collectively owned by the original community for years and years and the area has been carefully protected against building and abuses.

But let’s get back to sport climbing, the principal theme of this post.

DIFFICULTY
The rock faces offer pitches of assorted difficulty and complexity levels and everybody are able to find a climb suitable for their abilities, from beginners to the climbing greats.
The highest grade is 9a and there are a good amount of 8c+ and 8c and many 8a-8b. For newbies, there are several well-equipped faces with a lot of grades suitable to beginners.

TYPE OF CLIMBING
There is really something for everybody! From the smooth slabs at Son Pouses to the overhangs of Becco d'Ajal, from the short and intense pitches at Sasso dei Finanzieri to the long and sustained pitches at Rio Gere and Setsas.
The rock faces around Cortina feature a variety of different rock types and features: crimps, pockets, slopers; yellow, red, grey and black rock.
There are no tufas however, these are not really found in the Dolomites.

EQUIPMENT
All the crags are well equipped with bolts and chains at the rest places. You will find only a few pitches with obsolete equipment and these will, in any case, soon be put right. I advise 80 meters, or at a minimum 70 meters ropes.
On some crags, for example Cinque Torri, where you can find both sport climbing routes and traditional multi-pitch routes, helmets are advisable.
Otherwise, you need normal sport climbing equipment. 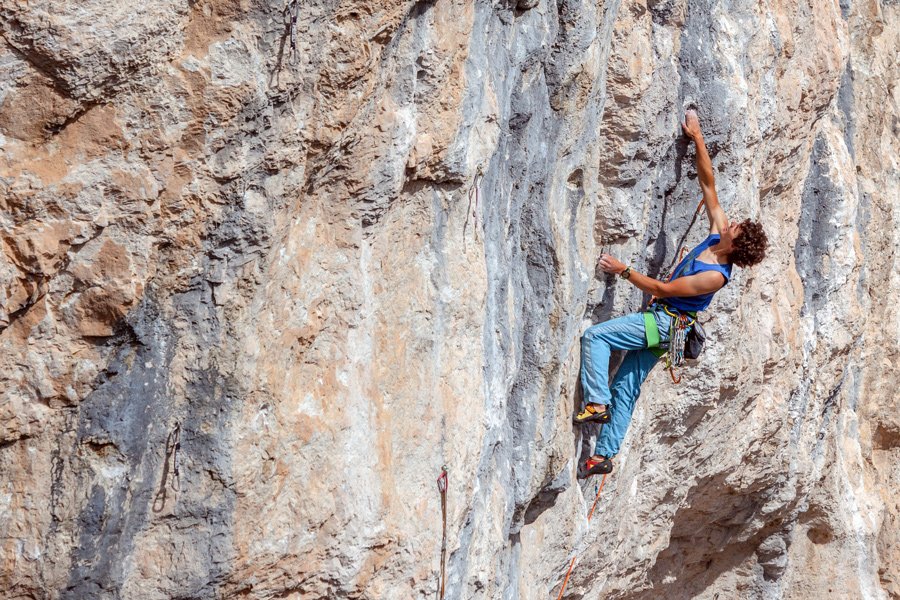 CLIMATE
During the summer period, from the middle of June to the beginning of August, the climate is pleasantly warm during the day and fresh during the night.

From July to end-August, there are sometimes thunderstorms in the afternoon. A warm sunny day can transform in a kind of hell in less than an hour. Considering the wind-chill factor, temperature can fall up to 15 degrees. I suggest that you always wear suitable clothing, however.

GUIDE TO CORTINA’S SPORT CLIMBING
In terms of climbing guides are concerned, last year a guidebook was published. In order to climb in this area I recommend that you buy this guidebook to Cortina’s crags: “Falesie a Cortina d’Ampezzo”.
The guidebook is in three languages: Italian – English – German.
You can see details and buy it on the guidebook page.

RESPECT THE ENVIRONMENT
Although it should not be required to remind mountain and climbing lovers of the importance of respecting the environment I’ll go over of a few rules here:
- never leave litter;
- do not put up tents near rock faces. In the Cortina area camping is allowed only in authorised and equipped camp sites;
- don’t park on the grass;
- don’t light fires;
- avoid leaving excrement near climbing walls for hygienic reasons and out of respect for your fellow climbers;
- do not alter the equipment on the rock faces at all. 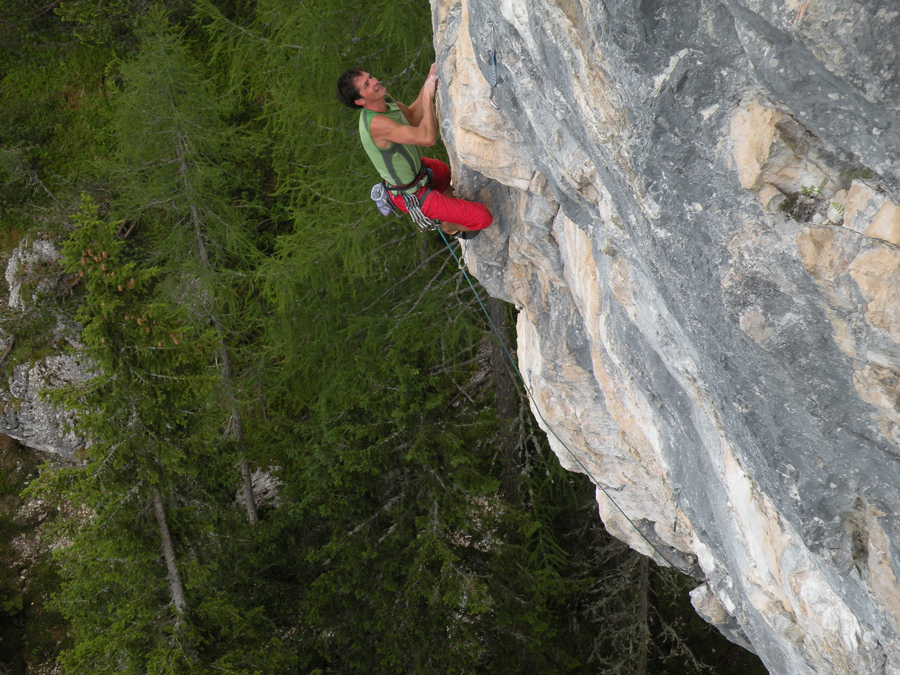 WHEN TO COME
The best time is from late May to October but November can be good too if snow has not yet fallen. Whilst there are exceptions, Cortina’s winters are in general too cold for climbing.

HOW TO GET HERE
Cortina d'Ampezzo is in the north of the Veneto region, 44 km from the Austrian border. There are no trains to Cortina itself and the nearest train stations are Calalzo di Cadore to the south and Dobbiaco (Toblach) to the north. From these stations, you will need to get a bus to Cortina (40 minutes - 1 hour).

By car the town is less than an hour from the A27 motorway (Pian de Vedoia) and an hour and a quarter from the A22 Brennero Bressanone-Val Pusteria exit.

There are also bus services to and from Venice, Treviso and Bologna airports.
The Cortina Express Bus (www.cortinaexpress.it) and AVTO Bus (www.atvo.it) operate direct buses from Venice to Cortina d’Ampezzo. Go to the web sites for schedules and more information.
The bus takes about 2-3 hours.

WHERE TO STAY
There is a huge range of hotels and B&Bs and four camping areas in Cortina. It is also simple to rent an apartment (but you need to book ahead or very little is available).

MORE INFO
Visit the following link to get more information about climbs in Dolomites.