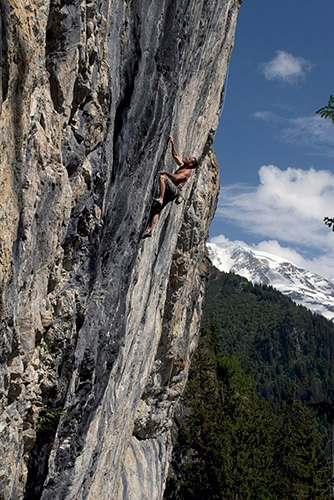 Takamine is free and graded to a "little" 9a by the same man. As soon as announced, the digital guidebook has been updated !

The opportunity to focus on the crag, and it's Gilles Brunot himself, hyperactive bolter around Chamonix, who write it.

Bionnassay crag is perched at 1500 m altitude in the municipality of Saint-Gervais-les-Bains, away from the noise of the valley. This is one of the closest hard crag of Chamonix. You climb it with a view on the glaciers of the domes of Miage. The lower area is the most accessible, the beginner level to 5c +, you don't climb when it's cold because the forest hides the sun at the foot of the routes, some of which are 40m. In the higher area, most beautiful, you heats up especially from 6c and then attempt beautiful routes in level 7, 8 and 9a to the moment, but other projects are waiting to be deflowered .

The top sector, with its sunshine, is climbable on sunny winter days even if it sometimes takes the approach march with snow up to their knees! In summer, you have to come early, the sun coming around 13h. Climbing style side, a lot of crimps, small or large, slopers or some short cracks. In short, one of the most beautiful spots near Chamonix, where you can climb in all seasons.

Our digital guidebook is up to date on Android and iOS :)